What is it that makes you…YOU?  Joe Gardner (voice of Jamie Foxx) is a middle-school band teacher who gets the chance of a lifetime to play at the best jazz club in town. But one small mis-step takes him, instead, to ‘The Great Before’ – a fantastical place where new souls get their personalities before they go to Earth. Joe cannot understand what he’s doing in this place, and is determined to return to his real life, if he can just figure out ‘HOW’? This is when Joe teams up with a precocious soul, #22 (voice of Tina Fey), who has never understood the appeal of being human, but Joe must try to convince #22 what´s great about living, so that he can go back to Earth, and, hopefully, entice #22 to join him.

This is another good family movie from Disney & Pixar. Rated: PG

After the Civil War, Captain Jefferson Kyle Kidd (Tom Hanks) is moving from town to town, to camps, to any kind of settelement to read aloud news from around the world from newpapers he collects. And, even though the news may be old, it’s ‘new’ for the citizens of these unsettled, sometimes wild, parts of the American West of 1870. Captain Kidd is a fine storyteller, adding humor to his news readings, while collecting whatever coins listeners are willing to drop in his cup.

While traversing the plains of Texas, he meets a 10 year old girl that had been taken by the Kiowa people and raised for most of her life. The captain agrees to deliver the child to where the ‘Law’ says she belongs. But, as these two strangers travel hundreds of miles, facing challenges, both physically and emotionally in the unforgiving wilderness, their lives become entertwined as they search for what can be called ‘Home’.

Tom Hanks is such an entertaining actor, no matter is character, and is, again! The young girl, played by a German actress only 12 years old,

Helena Zengel, is just marvelous!! Her facial and physical emotion will be seen again by Americans, I am sure! Rated: PG13

JUMANJI, The Next Level 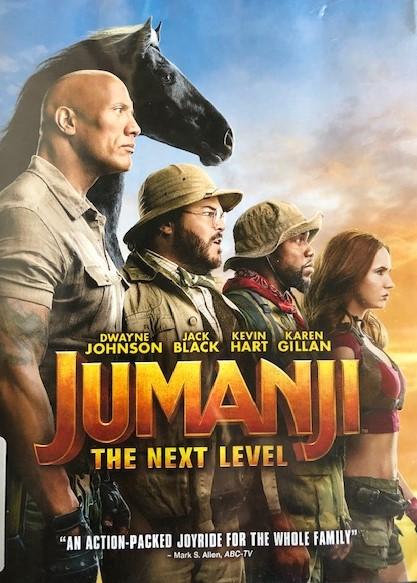 Yes, Robin Williams was awesome in the original Jumanji, but if you have not watched the new, 2017, version Jumaji, Welcome to the Jungle, starring Dwayne Johnson, Jack Black,  Karen Gillan, Nick Jonas, and Kevin Hart, you really need to!

(Borrow it from the Watseka Library!)

Now, we have the 2019 sequel, Jumanji, The Next Level , and it is hilarious! All of the characters from 2017 have returned, plus, the great veteran actors, Danny DeVito and Danny Glover! Again, this is an action packed movie, as all the versions have been, with a great plot revolving around a game…not a board game, as Robin Williams had to win, but an 1990s video game.

In this newest movie, three years has passed since the classmates had their first video game adventure, and they decide to meet up over Christmas Break for a ‘kind of’ reunion. But, when one person does not show up, the others go to his house to find out why he hadn’t come to the reunion! They meet his grandfather, Danny DeVito, and realize the friend must have returned to the Jumanji game adventure.

They also, realize, that he’s probably at the ‘next level’, a level none of them have experienced, nor mastered; they also realize he will need their help to return to reality! Thus, the fun, riddles, and scares begin….and many laughs, too. 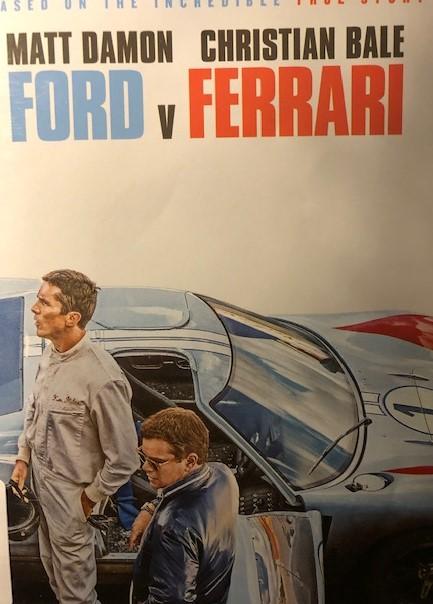 WOW!!  What a terrific action-packed movie!!  Carroll Shelby (Matt Damon)and Ken Miles (Christian Bale) portray the men hired to build the fastest car in the world for the Ford Motor Company in mid 1960s. After a failed attempt to merge the Ford and Ferrari Companies, and after Ferrari himself states, “the Ford Motor Company only makes slow, ugly cars”, the challenge is ON!

Ford wants to win the famed 24 hour long Le Mans race in France, which is consistently won by the Ferrari Company. Henry Ford II, tells Carroll Shelby, that he will approve any amount of money needed to beat Ferrari!

The acting, filming, and true story is brought to life, wonderfully, in this film; my only regret– I didn’t get to watch it on a big screen at a Theater, with Dolby surround sound! Be sure to borrow this one—Rated PG-13.

This is a truly exciting, action-packed film explaining how the battle of Midway transpired in the South Pacific Theater of War, and how this famous battle was a turning point for the Allies during WWII.

With an outstanding cast, and computerization of the great aircraft carriers, air battles, and the attack on Pearl Harbor, I was truly on the edge of my seat (sofa, in this case)! Dennis Quaid as Vice Admiral William Halsey and Woody Harrelson as Admiral Nimitz are just two of the fine actors who transport you back to the time between 1937-1942, and how crucial these battles were to America and the rest of the world trying to end the ruthlessness of the Nazi army, and the endless attacks of the Japanese Empire.

Even though you are fully aware of the outcome of the war, I think you’ll feel the power of this film as you ‘root’ for the American Navy to succeed!  Rated: PG13

Teenage brothers Ian and Barley decide to embark on a magical quest in the hope that they can spend one more day with their late father.  Since the boys just happen to be elves, the journey  is filled with mysterious maps, dangerous obstacles and unimaginable discoveries.

When their Mom finds out her sons are missing, she asks the legendary ‘manticore’

to help her rescue her sons, creating even more adventures!

With a stellar cast including Chris Pratt, Tom Holland, Julia Louis-Dreyfus, Octavia Spencer, and of course, John Ratzenberger, who appears in every PIXAR film, PIXAR has created another entertaining film that adults love as much as the kids!

A beautiful story set in a small, conservative English village in 1959. A young widow, Florence, (portrayed by Emily Mortimer) opens her bookshop in an old home, feeling that all towns need a place to purchase books.

However, the self-proclaimed ‘town ruler’ decides that she wants Florence’s shop closed!

With the many colorful characters–a gentleman neighbor, a very young shop helper, and others, our plot reveals this wonderful tale that makes YOU want to hurry into your library for a book to read and love.

PIXAR has made another super film for the entire family, with voices by Will Smith, Rachel Brosnahan, Reba McIntyre, Tom Holland, and many more. What I find most exciting is—this comedy, adventure, spy film is based on an original film written, created,  and published by Iroquois County’s very OWN–Lucas Martell, Donovan High School Graduate and son of Brian and Debby Martell of Austin, TX…formerly, of Iroquois County! Lucas’s original short film is titled Pigeon:Impossible, (which you can Google and watch, too.)  Disney/PIXAR acquired the rights to Lucas’s film, and made this fun family movie, Spies In Disguise about a whiz-kid inventor, who grows up to help a super spy (Will Smith’s character) and help to save the world!  Fun for kids and, as usual  with PIXAR, provides, great comedy references that adults ‘get’, but zoom over the heads of the kids. Why, you wonder, well,  because,  they’re too young! Ha ha

And, in my opinion, it’s just neat to see Lucas Martell’s name in giant letters at the opening credits of the film….So, yay, Lucas….and, yay, PIXAR, for another neat movie.

You probably watched the excellent animated version of DUMBO as a child, now you must watch this live-action version dedicated to following the original story, but even better!  Travel back 100 years to what circus life might have been before movies, television, and the internet. Life was simpler, yes, but the excitement of being entertained was just as fascinating! Experiencing real jungle animals, costumed performers was very thrilling to everyone when the ‘Circus’ came to town—especially with a flying elephant! You feel as if you are actually flying with Dumbo, and want to cheer him on as he takes his first flight.

In true Disney form, you will laugh, and cry, but you will love this movie! And, in true Tim Burton form, the movie is perfect for adults and children. Great performances by Colin Farrell (as the wounded WWI veteran), Danny DeVito (as the Circus Ringmaster), Michael Keaton (as a not so nice money-man), and DUMBO as DUMBO!!  Rated-PG

This is a delightful, family-friendly movie starring WWE’s star-turned-actor, John Cena, as a ‘by the book’ leader of smoke-jumpers who rescue three children and must care for them, while trying to find their parents, while still performing their jobs as smoke-jumpers! Thus, Cena, along with  Keegan-Michael Key, as a fellow firefighter, find themselves in some hilarious (for us, the viewers) situations, since they know nothing about watching and caring for rambunctious kids! Rated-PG

First of all, if you haven’t watched “A Dog’s Purpose”, watch it, because it is great!!
This new movie, “A Dog’s Journey” continues where “A Dog’s Purpose” ended….and, it, too, is a wonderful family movie; a movie for anyone who LOVES a good story!
Ethan, (portrayed by Dennis Quaid), is the owner of Bailey, beloved dog (voice by Josh Gad), who just happens to have more lives than a cat! In this movie, rather than taking care of Ethan, it’s Ethan’s granddaughter that Bailey charges through many adventures as her Guardian-Angel Dog! But, beware, when this delightful tale ends, you wish for “Just one more adventure, please.” Rated: PG

Dr. John Dolittle, an eccentric known for his ability to talk to animals, disappeared from public life after his wife passed away. But, now, Dolittle must return to public life to find the ‘cure’ that will save Queen Victoria’s life! Thus, Dolittle (played by Robert Downey Jr), sets sail with his animals and his young apprentice to find this cure on an island  only heard of in myths and legends. Adventure erupts everywhere, as old enemies try to hinder his journey!

A delightful movie for all ages, with gorgeous scenery, not to mention talking animals through the use of CGI…computer generated  imagery.

This movie is based on the extraordinary life of Harriet Tubman, American freedom fighter, who having escaped from slavery, returns to the South, again and again, to save others from bondage. Harriet risks recapture and death as she guides hundreds to safety as a ‘conductor’ on the legendary Underground Railroad. Our heroine is portrayed brilliantly by Cynthia Erivo.  Harriet is a wonderful movie to view and spark a family or a classroom discussion about slavery and the human desire for freedom; and how it caused a nation to go to war to end this horrific practice of owning another human being.

CALL OF THE WILD

During the late 19th century, Buck, a gentle St. Bernard/Scotch Collie, lives the good life with a well-to-do family in California, until one night when he is stolen and sold to be a sled-dog in Alaska after Gold is discovered, and sled dogs are in high demand. Thus, begins the difficult adjustment for poor Buck, having lived in warm California, but now in Alaska…and expected to pull a sled! Along with his new master, played by Harrison Ford, Buck learns what it is like to become a part of the ‘Wild’ or wilderness of 1800s Alaska.